Gone are the days when a brick-heavy machine was what a dedicated gamer needed to fire up a video game. Today, notebooks have slimmed down considerably, so much so that you can bring your most favorite titles along to a friend’s place without dislocating a shoulder.

The gaming world owes a great deal of this remarkable laptop evolution to Nvidia’s Max-Q GPUs, which are notebook equivalents of the robust 10-series graphics cards, but with much lower temperature outputs. Laptops equipped with these new generation chips are virtually just as powerful as their desktop counterparts while remaining thin, light and quiet. Besides graphics performance, the current crop of high-end gaming laptops also packs the latest display technologies, including 120Hz refresh rates, 4K resolutions, G-sync and virtual reality. And if you dig a little deeper into the market, you’ll even find notebooks with dual hard-drive configurations and support for several sticks of RAM.

So, are you looking to buy a powerful but portable gaming laptop? Well, you have more than a few options to consider. Here are five high-performance notebooks that are leading the pack.

The Zephyrus is one of the few laptops that currently employ Nvidia’s Max-Q technology, and at first glance, it is easy to see why it’s the best among these new Max-Q machines. Despite packing a GTX 1080 graphics chip, the laptop is only 0.7 inches thick, which is slimmer than most traditional notebooks, including the Dell XPS 15.

If you’re wondering how the Zephyrus manages to keep its hardware cool, Asus has answered your concerns with an innovative design, where the laptop’s bottom panel opens up half a centimeter for better airflow when in use. Gimmicks aside, the Zephyrus’s GTX 1080 will chew through your most demanding titles without breaking a sweat. And when you want to get some work done, the Intel Core i7 and 16GB RAM combo will be more than enough to keep your video-editing software running smoothly while Resident Evil 7 is paused on the taskbar. Thanks to its slim design, it sports a 4 Cells 50 Wh battery which stands only around 45 minutes ?.

Admittedly, the $2,699 Zephyrus is significantly pricier than the average gaming laptop, especially given that affordable models like the Acer Predator Helios 300 exist. Nevertheless, you get just what you pay for: a premium gaming machine that is undoubtedly ahead of its time. Gamers looking for cheap laptops often have to compromise significantly to find one that fits their bill. With less than $1000, for instance, the best you can get graphics-wise is a GTX 1050, or if you push your luck, a 1050 Ti.

Acer’s Predator Helios 300 is hands-down the best gaming laptop for budget lovers. For only a few bucks above the $1000 price mark, you get an Intel Core i7-7700HQ processor, 16GB DDR4 RAM, and the Nvidia GeForce GTX 1060 GPU, which compared to the GTX 1050, offers much better performance. On a single charge and heavy gaming, its 4-cell 48 Wh battery stands for 54 minutes.

Admittedly, the Helios 300 lacks the refinements you’ll find in the Zephyrus. While it does look a lot more of a gaming behemoth than Asus’s number one, it is notably heavier, thicker and noisier. Moreover, its 15-inch 1080p matte screen offers no G-Sync, so expect some tearing when you turn off v-sync, and your framerate gets below 60fps. Regardless, the GTX 1060 will easily maintain 60fps with the right in-game graphics settings, even in high-end games. The Aero 15X-BK4 is another gaming machine that owes its strengths to Nvidia’s Max-Q graphics. Equipped with a GTX 1070 Max-Q GPU, the laptop is powerful enough to run most, if not all games at 1080p/60fps or higher.

While far from being the cheapest gaming laptop on the market, the Aero 15X’s ultraportable form factor makes it seem more like a premium business class notebook than a gaming rig. And when it comes to performance, the machine surprisingly outdoes similarly specced laptops like the MSI Stealth Pro-078 and the Eurocom Q5.

The only blemish to an otherwise excellent specs sheet comes in the screen, which offers a maximum refresh rate of 60Hz and no G-Sync. A less weighty downside is the webcam placement at the bottom of the screen, which is similar to the setup on the Dell XPS series. Although that keeps the bezels at an elegant 5mm, it doesn’t offer the best angles for video calls. Dell’s compact 13-inch Alienware may be the most carry-friendly laptop on this list, but that’s not the only reason to add it to your cart. For starters, it’s one of few laptops to sport an OLED display, which offers crystal clear picture quality and vivid, life-like colors. The Alienware 13 also comes in TN and IPS variants, but unless you’re running on a tight budget, we strongly suggest going with the QHD OLED option.

Under the brilliantly designed chassis is an Intel Core i7-7700HQ, 16GB DDR4 RAM, a 512GB SSD, and the prize winner, a Nvidia GeForce GTX 1060 GPU with a remarkable 6GB of VRAM. Of course, the laptop comes in several hardware configurations, the most robust version rocking a whopping 32GB of RAM and dual 1TB SSDs.

Overall, the Alienware 13 is an admirable piece of engineering. The small form factor might prove an inconvenience to some gamers, especially if you’re coming from a 17-inch laptop or a desktop, but at the least, the keyboard is well-spaced and comfortable. And while you may not be able to type away for more than a few hours without a power outlet, the Alienware 13 offers decent battery life. With 79 watt-hours, it lasts about 1 and a half hours of screen on-time on maximum load – which is just about par. 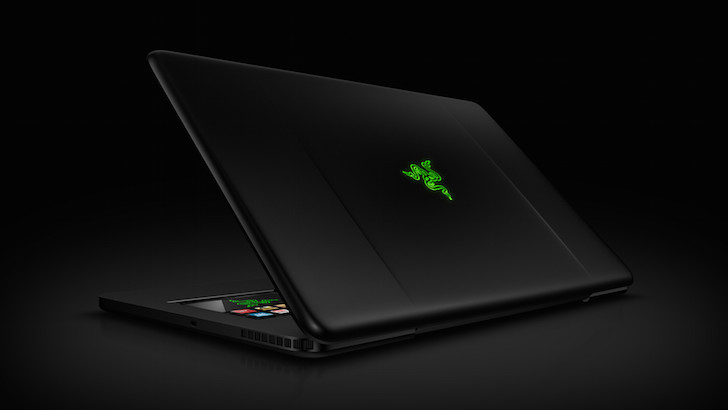 Proclaimed by critics as the MacBook Pro of gaming laptops, the Razer Blade combines looks and portability with gobs of gaming power, which results in a machine that you can easily take with you on your daily commute. While the Acer Predator Helios and the Alienware 13 scream “gaming” in your face, the Razer Blade looks inconspicuously cool.

That said, you’ll get a different story when you crack open the hood. The Blade 14 comes with an Intel Core i7-7700HQ processor and Nvidia’s GTX 1060 GPU, which is precisely what to expect in a high-end gaming computer. Despite being lightweight, it sports a 70Wh battery which provides about 1.5 odd hours of battery life on maximum load, which is decent for a laptop this portable. Hardware configurations are relatively limited, but if your wallet can handle it, you can up the 256GB SSD to a 1TB drive, and the Full-HD display to a crisp 4K screen.

The Razer Blade 14 is not without shortcomings, however, as its aluminum chassis heats up when gaming, and it’s two bottom-facing fans can get pretty loud. Furthermore, being the priciest laptop on this list means it’s not really made for budget-minded gamers. Nonetheless, if style and portability are as high up your list of priorities as performance and battery life, you can’t go wrong with the Blade.

Gamers are used to sitting in their rooms in front of unmovable desktops. But now that high-performance ultraportables are steadily streaming in, you no longer need to separate your gaming life from your reality. With the laptops above, you can take notes in class during the day and free-run through Dying Light in the evening without having to juggle between two computers.